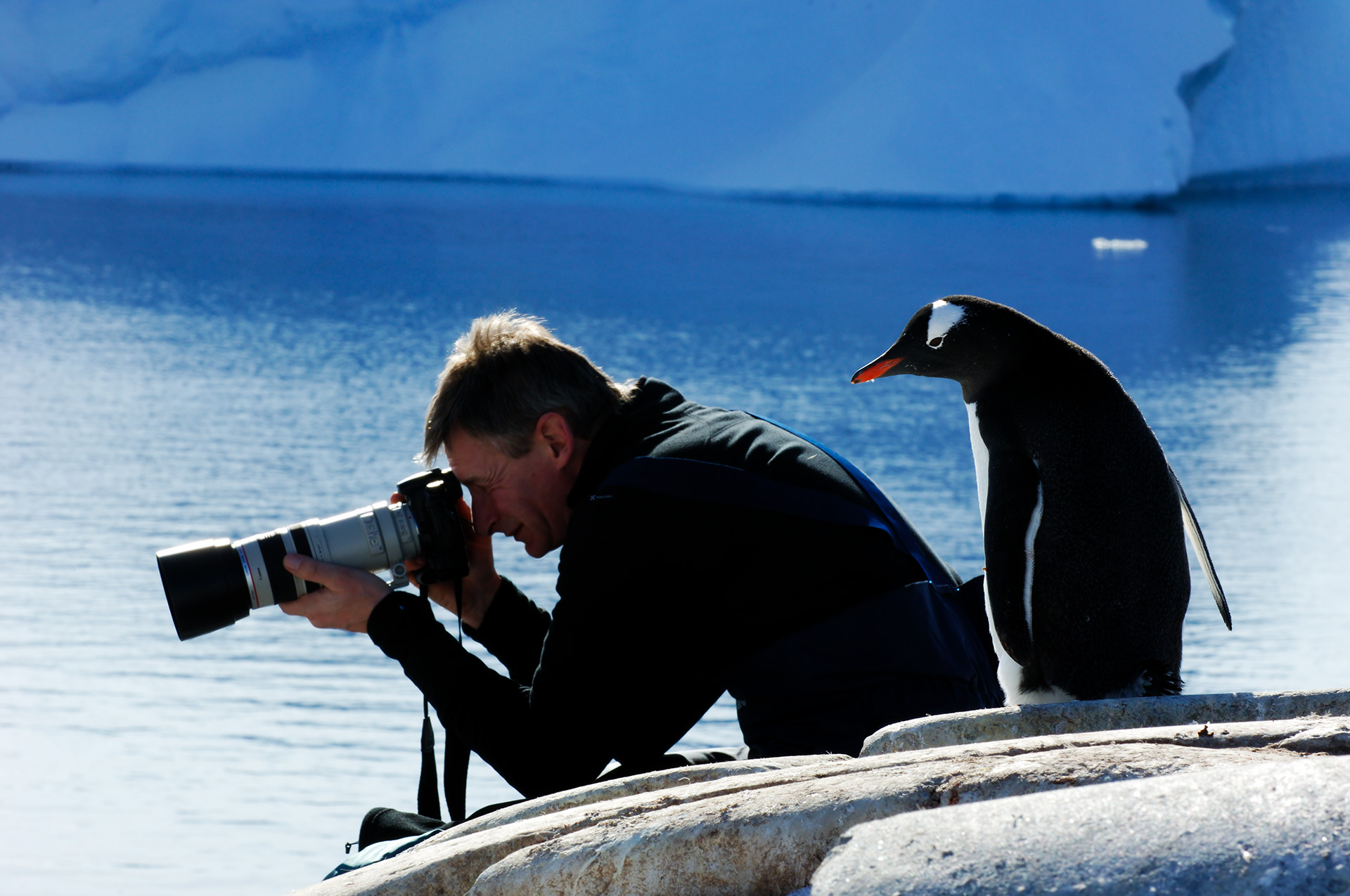 Above
That’s not me. But what a moment it was. Photographing penguins in front of us, I saw this opportunity behind me. I quickly turned, chose a smaller aperture for greater depth of field while aiming the camera and made the shot.

SNP Natuurreizen
For almost three decades now I accompany tours to destinations all over the world. With much pleasure adventurous hiking tours from 1993 until spring 1997 as a tourleader for SNP Natuurreizen. Mainly in Europe, but also twice to Indonesia and once to India. I really loved that time! It is so great to be outdoor with like-minded walkers, all loving nature and traveling. Experiencing landscapes, nature, talking with and listening to each other, being in a group. Sharing knowledge and experiences, leading a group.
When becoming a professional photographer in 1997 I stopped with tour leading. Until 2002 when I started working with SNP Natuurreizen again, but then for special photo tours. In 2002 to the wonderful Colorado Plateau in the USA, with awesome canyons, arches and mountains.

1993 – Hebrides, first tour as a tourleader
My first wander tour as a tourleader in 1993 took me to the Hebrides in Scotland. It was a very special trip. I had never been there before and had a full group to lead. It turned out not to be a standard trip.
One of the tour members had to go back to the Netherlands because of an unexpectedly quick death of a dear friend. Her journey back to the Netherlands had to be arranged. An older man made me worry because of his condition. He told me at the end of the trip he had just had heart surgery and this trip was a test for him. I wished he had told me that the first day. One day an older lady was that slow that I had to send the group ahead. I myself had to accompany her for one and a half hour in a very slow pace to our next accommodation. With an amount of midges around, that makes you want to walk as fast as possible.
The landscapes were overwhelmingly impressive, with the greens, grays and blacks, mostly hilly, sometimes very steep, like the Black Cuillin on the Isle of Skye. The grayish and of course at times rainy Scottish weather was adding up to a real Scottish experience.
The day I came home after this tour I sat down and put on a cassette tape – which I bought on tour – with Scottish music. And then the tears came. I missed the group and was deeply impressed by the Hebrides. It was indeed a great experience!

2005 – South Africa, a life changing photo tour
On assignment for ANWB Reizen magazine in 2004 with one of the editors – in Italy I think – he came with the idea to organize a special journey for the readers of the magazine. With of course an article to make for the magazine as well. And so I went to South Africa in January 2005 to accompany a full group as a photographer/writer with the luxury of a tour leader accompanying the group for the tour leading things.
We had a great time and it turned out to be a very special tour. A real life changer! A beautiful lady in the group became my wife and two years later I became a father!

2007 – Antarctic Peninsula
“A journey is a person in itself; no two are alike. And all plans, safeguards, policies and coercion are fruitless. We find after years of struggle that we do not take a trip, a trip takes us.” Thus the first sentences of the Expedition Log of the Oceanwide Expeditions trip to the Antarctic Peninsula from February 28 until March 10, 2007.
And, wow, these trip of only five days Antarctic Peninsula sure took me! Two days on the Drake Passage before arriving on the Peninsula, five days Antarctic and two days back on the Drake Passaga again to Ushuaia, the most southern city of the world.
… more to follow …

2008 – Father & Guide/photographer for Oceanwide Expeditions
What an unforgettable experience this was! One year after leading a group for a readers trip for the Dutch ANWB Reizen Magazine, I boarded as a guide/lecturer for Oceanwide Expeditions itself on the vessel Professor Molchanov for a trip to the Falklands, South Georgia and Antarctic Peninsula! With colleague guide/lecturer Anja Fleig and expedition leader Rinie van Meurs and hotel manager Lilian van Meurs.

I had prepared several lectures on Antarctica, geology and much more. But almost from day one I was the photographer guide. I lectured on photography, on how to take good pictures of penguins so that guests would go home with better pictures. I really enjoyed helping the guests photograph penguins. And at Salisbury Plain Rinie and Anja also left me free to take pictures for myself, while they accompanied the guests.

Thank you Oceanwide Expeditions and specially Frits Steenhuisen for giving me the opportunity to join this trip as a guide/lecturer. Special thanks because normally you have to do two trips after each other and I only wanted to do one, because of being a fresh father with a wife and nine month old baby at home.